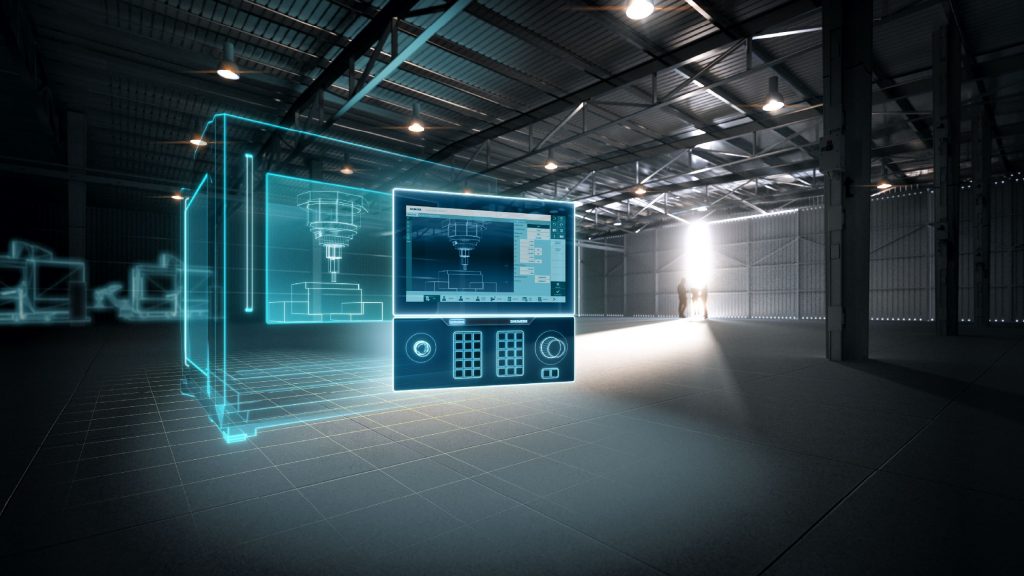 Good morning, in a previous article on our blog we described the functionality and importance of computer numerical control in the modern mechanical industry. Today we introduce the latest arrival from Siemens, a revolutionary CNC.

The new cnc Sinumerik One from the German company Siemens has the highly innovative peculiarity of being both a real physical and a virtual control at the same time. The innovative component of the cnc lies in its Digital Twin technology.

Since February 2020, Siemens has finally made its new CNC available to machine tools manufacturers, who have now for the first time the opportunity to open an interactive window between the real world and the virtual world. The advantages, as we are going to see, are enormous.

The new Sinumerik One control, which will probably revolutionize the way machine tools are conceived and built, was actually presented to the world by Siemens in May 2019 at its research centre in the German town of Erlangen. Sinumerik One represents the first cnc that was born both as a physical and digital control, allowing machine tools manufacturers to improve the performance of their machines still in the design phase and consequently reduce delivery times.

Immediately after its presentation in May 2019, the new cnc was made available to a small number of machine tools manufacturers to conduct a pilot project. In Italy, for example, the project was conducted by the companies Pama, a company that manufactures heavy machines for boring and milling, CB Ferrari specialized in the construction of machining centers for moulding sector and precision mechanics, Ghiringhelli grinders and Breton a leading company in the construction of machines for the processing of light alloys and composites.
The pilot project has achieved results that went very well beyond initial expectations, leading Siemens to debut its product making it available to all manufacturers.
The success of Sinumerik One, confirms once again Siemens as a global leader in the field of digitalization in industry.

Main features of Sinumerik ONE

The first feature to report is the reason for his name: “ONE”. The answer lies in the fact that the cnc is unique for all types of machining, it finds application in all technologies for milling, turning, grinding, robotics and additive manufacturing. Moreover, the name “ONE” has been chosen because it is a unique tool available both virtually and physically, both in the design phase of the machinery and in its productivity phase. The third but no less important reason is the computing power of this computer numerical control, equipped with 4 processors, a feature that places it on the top step of the podium of the most powerful computer numerical controls on the market.
There are many technological innovations and improvements made by Siemens compared to previous models. In addition to the computing power and the innovative Digital Twin technology, which we will see in the next paragraph, Siemens has equipped Sinumerik ONE with the Simatic S7-1500F PLC, a PLC which has a performance 10 times higher than previous model. Other features have been enhanced, such as the “Run MyRobot” option for the robot machine interface, which has been extended to the Staubli and Mabi robots, added to the already featured Kuka and Comau in the previous models. A further function has also been added for the mould processing sector, “TopSpeed” option allows to improve the performance for high speed machining.

The advantages of “Digital Twin” technology

We now see the most important innovation destined to revolutionize the cnc industry and the entire machine tools manufacturing sector.

The cnc Sinumerik ONE is a numerical control that is equipped since its birth with a real twin in digital form. This peculiarity allows machine tools manufacturers to do all tests in a virtual environment during the design phase of the machine, allowing them to intervene and make modifications even before the construction of the machine. This possibility translates into an enormous gain in time and work simplification during the design and construction phase of the machinery. On the customer side, the most immediate advantage is the novelty of being able to purchase not only a real machine but also a virtual machine and therefore to check even before finalize the purchase whether the machine corresponds perfectly to his needs. This novelty allows the customer to avoid making a wrong purchase and to contain costs in case he needs to make changes on the machine he intends to order.

In terms of numbers the resulting benefits are very important. Productivity increases by up to 25% and delivery times can be reduced by up to 30%. In addition to this data, there is a reduction of about half the time currently taken for the commissioning and start-up phase of the machine.

In conclusion, the new Siemens numerical control once again puts the German company at the forefront of digitization and process efficiency in Industry 4.0.