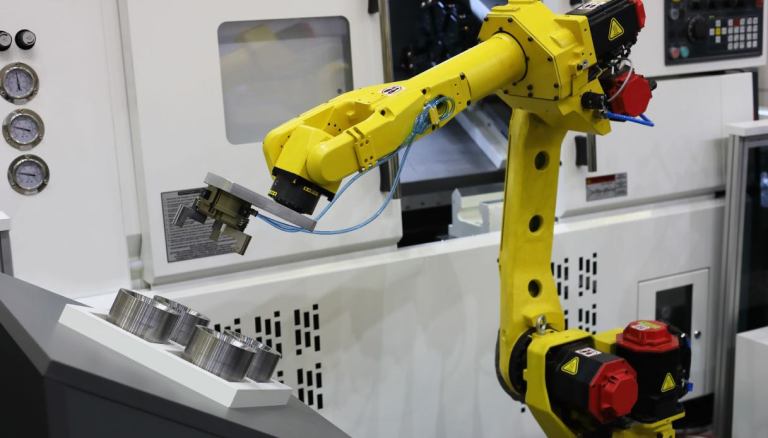 “Cobots”, this new word is a mix between the English terms “collaborative” and “Robots“. Although unknown to the general public, cobots represent the most advanced example of industrial automation. At least to date.

This is the latest evolutionary step that industry 4.0 has taken in the industrial manufacturing field bringing countless new features.

But what exactly are cobots and why are they so important? How can they be integrated into a production reality that has already started?

Let’s find out the answer to these questions starting from a practical case: Fanuc, one of the world giants in industrial automation and the pioneer in the development of collaborative robotics.

What are cobots: characteristics and advantages

Until about ten years ago, when they started to be installed inside factories, the cobots were looked at with scepticism and, we cannot deny it, with a pinch of fear. Those feelings were dictated by the fear that these new robots could replace human workers and drive them out of any production plant. Today, instead, cobots are seen as one of the best examples of collaboration and cooperation between man and machine, both inside and outside the industrial environment.

Cobots, in addition to exchanging information among themselves by exploiting algorithms, technologies and communication infrastructures, as the basis of industry 4.0, are also able to act (and interact) perfectly with the environment around them and with the people inside the production plant. As we read in the first patent on this technology and dating back to 1999, the definition of a collaborative robot is “an apparatus and also a method for direct integration between a person and a generic manipulator controlled by a computer”.

The advantages of this technology are immediately evident. By exploiting the algorithms and technologies of industry 4.0, cobots allows to automate the entire production process within a factory. The artificial intelligence algorithms, and the continuous exchange of information with the other cobots and people inside the production plant, “guide” the robots inside the factory and make it possible to circumvent obstacles or follow “alternative paths” to the ordinary ones.

Although cobots have already reached a rather advanced level of evolution, the sector is still making considerable progress. In particular, scientists and engineers are engaged in research into systems that will enable them to further refine the manual skills of robots and make them even more autonomous than they are today.

The use of more powerful processors and the use of integrated vision systems, which will allow cobots to elaborate even more complex artificial intelligence algorithms and to be completely autonomous when moving around the factory, is fundamental in this perspective.

Cobots, then, play a fundamental role in the post-Covid production universe. Their high degree of autonomy allows them to be controlled even from a distance, avoiding people being physically inside the factory, thus putting their health and safety at risk.

Among the myriad of companies and research centres involved in this sector, Fanuc is one of the companies offering the most advanced and versatile collaborative robotics solutions. Fanuc cobots can be adapted to a wide range of tasks and can be easily integrated into an existing infrastructure without requiring major intervention, thus Fanuc cobots allow to automate production processes in  a relatively short time. They are specialized in boring and repetitive tasks with low added value: workers can thus be dedicated to more “profitable” operations, allowing the company to reduce the costs of the entire production process and optimise its performance.